Home » Blog » An End To Puddles? Bizarre Thirsty Concrete Can Suck Up Hundreds Of Gallons Of Water In A Minute! 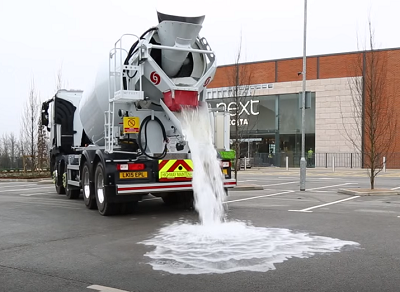 Specially designed permeable concrete allows water to flow down safely into the ground beneath providing a possible solution to flash flooding.

An enhanced type of concrete has been revealed which appears to make hundreds of gallons of water disappear before your very eyes. No, this is not an elaborate magic trick or some sort of an illusion, but a specially designed product which can absorb up to 880 gallons of water in 60 seconds.

Many types of concrete are treated with a liquid water repellent in order to prevent water from leaking into the finished surfaces of the interior of a building such as your home. However, this enhanced type of concrete differs, as it has been purposefully created in order to soak up and divert excess water rather than resist it.

This type of thirsty concrete is not a new product, in fact it has been in use for around 60 years. However, advancements in concrete technology have now enabled it to be used as a top surface capable of withstanding the weight of vehicles, therefore making an appropriate material with which to build carparks, driveways, streets or other areas where surface water can be an issue.

How Does Concrete Drink Water?

The concrete is made from a permeable top layer of large pebbles, allowing water to speedily flow through it freely and follow a course through a further section of loose aggregate before eventually reaching a level of rubble beneath. Drainage channels which are integrated into the rubble serve to disperse of the water and therefore increases the amount of liquid that the concrete can appear to cope with.

With heavy rainfall and archaic sewers in the UK, we are quite often at risk of overwhelming our drainage systems, particularly in urban areas such as London and other major cities. The introduction of this type of water-absorbing concrete can assist by delaying the creation of surface water and the release of excess water into the sewers. This will be of huge assistance during storms and flash flooding. It could also be a solution to puddles that get out of control on cycle paths, bridleways, and even sports pitches.

In times of rising temperatures, the concrete is also able to release its store of water through the process of evaporation, which then produces a cooling effect in the air at ground level. This is in contrast to other types of ground surface materials that can become sticky and melt in a heatwave.

However, in the opposite type of weather, the concrete does not cope as well. If it is installed in areas that suffer from exposure to an extremely cold climate, then as the water permeates through the complex matrix, it can freeze causing the layers above to crack from the pressure beneath.

Manufacturers of this concrete have already installed it in a car park in High Wycombe as well as a golf course in Worksop. With the sort of attention and interest it is currently generating, perhaps it won’t be so long before it is being used as a surface on busy high street shopping areas, making stepping in puddles on a Saturday afternoon a thing of the past!