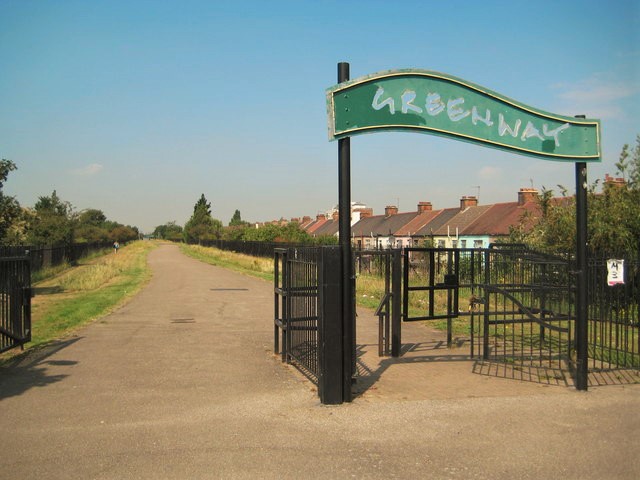 The Story Of A Popular Cycling/Walking Route In Newham

Newham Greenway is a popular route for walkers and cyclists in East London, but is that all it is? Like many places in London, Newham Greenway has a story to tell.

It’s easy to take where you live for granted and miss out on all the hidden depths of a city, and if you’re a visitor or worker too – how many of you look up and never look down at what’s in front or below you? It’s easy to be distracted when there are so many sights and sounds to explore, but there are many people who are fascinated at what lies beneath their feet, and in this case the secret history of Newham Greenway. So what is the Greenway, and where did it come from?

A Green And Pleasant Stretch Of Land

The Greenway is raised above the streets and was built on an embankment in the 1990’s. You’ll find the western end of the path at Wick Lane in the Old Ford area of Bow, and the eastern end at Royal Docks Road in Beckton. The path continues to the North towards Victoria Park, alongside Wick Lane Underpass, and it also crosses the boroughs of Stratford, West Ham, and Plaistow.

This high level path was constructed as a footpath and cycleway, but is one of the nicer routes to travel, and was always intended to be a haven for wildlife. Not only will you get some worthwhile views along the route, but there are plenty of trees and shrubs to attract the birds and bees too.

Points of interest along the 7.1 km route include the River Lea and Lea Navigation, Abbey Mills Pumping Station, and the Olympic Park. The Greenway benefitted from the London 2012 effect as an architectural firm worked to incorporate it with the Olympic Park – this included landscaping touches using salvaged timber and concrete perches.

The Greenway is currently permissive land, so you can only access it during the day, although it may soon become a 24 hour access route.

The Not So Secret History

The Newham Greenway was built on an embankment laying above a sewer, all part of the governments green strategy to introduce wildlife to the city, and establish networks for walking and cycling. What lies beneath the Greenway has never been much of a secret, especially if you look for the hints that are all around the area, such as the signs made from old sewer pipes. If you walk along to Beckton and the Beckton Alps end of the Greenway, you’ll also be treated to smells of a former industrial waste dump. The grass covered mound of waste was once home to a dry ski slope, which ran on the site from the late 80’s to 2001. Now the derelict mound is just testament to past industry in the area.

Perhaps the lesser known part of the story is how the sewers beneath the Greenway came along, and for that you have to look back to a time when salmon and lobsters were swimming in the Thames. This was how rivers used to be, but hot dry summers around the time of 1858, changed the landscape of London forever. Imagine the pressure on a drainage system that was little short of appalling – there was smelly, unhygienic sewage flooding directly into the river and on to the beaches at low tide, then sending it back up the pipes when the tide came in. It was Choleras’ horrible, unwanted new best friend.

A saviour was found in Joseph Bazalgette, forever famous for the 1,300 mile long network of sewers he constructed, on 3 levels across the city. Roughly 5 miles of his engineering work runs from a treatment plant in Beckton to Abbey Mills Pumping Station in East London. London has a lot to thank this sewage network for, including Newham Greenway.