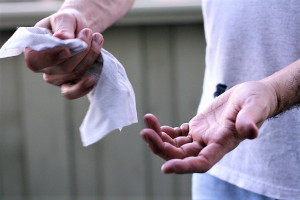 Pee, poo and paper are the only acceptable things to flush down your loo, yet there is a lack of information about the damage that flushing wet wipes can cause.

93% of sewer blockages are caused by wet wipes being flushed down the toilets of domestic properties in the UK. This horrifying information has been revealed as part of a study conducted by Water UK, who are the voice of all major sewerage and water companies operating in the country. The report also highlights the tremendous cost associated with the incorrect disposal of baby wipes, which amounts to £100 million each year.

The 300,000 sewer blockages that this money goes toward can all be prevented with some simple and sensible disposal techniques, namely ensuring that homeowners throw their wipes in the bin rather than the toilet. By doing so, the £100 million that is allocated towards fixing the sewer problems could instead go towards enhancing services and even reducing the monthly bill for homeowners.

Water UK emphasises that this problem needs to be tackled from three separate angles: manufacturers, water companies and the general public.

There has perhaps been a lack of information delivered to the general public thus far as to the dangers of flushing wet wipes down the toilet rather than using a bin. Although there will undoubtedly be some who are aware they shouldn’t be flushing them but continue to do so, there are others who simply have no clue and end up having to enlist professional drain unblocking services once their actions cause problems with their home plumbing. It is down to the water companies to provide education to residents by establishing an effective campaign that gets the message across to everyone.

However, attacking the problem from another area is to change the labelling on wet wipe packets to make it much clearer to consumers that these are plastic wipes that must not be flushed.

Aside from the dangers that sewage blockages can pose to the public, wet wipes also create serious environmental problems for the ocean and therefore its knock-on effect with marine ecosystems.

‘City to Sea’ is a campaign group against plastic pollution and their spokesperson Natalie Fee explains “Most people still don’t know that baby wipes contain plastic, and they would be a lot less likely to flush them if it was listed as an ingredient on the pack.” The campaign backs the easy-to-remember three Ps, which are to only flush pee, paper and poo.

If the findings of this latest report are not taken seriously, then there is a risk that raw sewage could back up onto the streets as was almost the case in September 2017 when a fatberg was discovered beneath Whitechapel, London. While it is common for routine inspections to find fatbergs, this particular monstrosity was quite special as it was around 250 metres along and weighed the equivalent of 11 double decker buses.

The fatberg consisted of wet wipes and nappies that were disposed incorrectly by domestic residents and bound together with congealed oil, grease and fat poured down the drains by fast food outlets. The fatberg was blocking a considerable portion of the capital’s eastern sewage system and could easily have been the cause of raw sewage backing up into the streets of Whitechapel had it not been discovered in time.

Although the team assigned to break up the fatberg are experts in what they do, and have specialised protective suits and drills to break up the blockage, it’s essential that this sickening story remains one of the worst in history and isn’t repeated. Responsible members of the public need to bin their wipes in 2018 and spread the word to others about the damage that flushing them can cause.