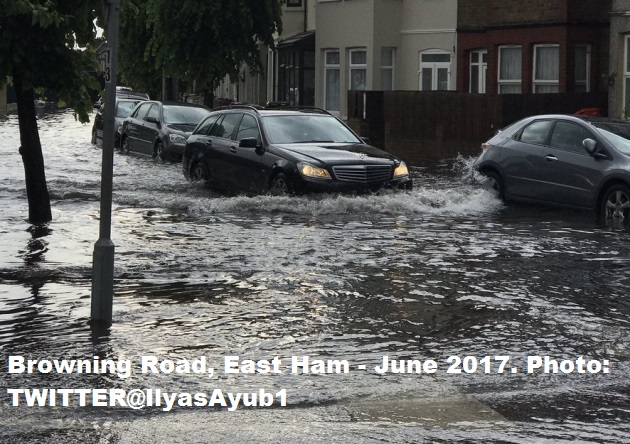 Torrential rain leads to blocked drains and flooding in Newham

The London drainage network was unable to cope with recent torrential downpours, causing headaches for residents, businesses and commuters.

British summertime is here, but rather than warm, sunny days, June has thus far been marked by grey skies and torrential rain. And, once again, London’s drains and waterways have proven themselves unable to cope with the deluge of water.

At the beginning of the month, a large number of streets in the borough of Newham were flooded following an hour-long downpour, causing misery and disruption for businesses, residents and commuters in the area.

Residential and commercial properties were also damaged by the flood waters, with Canning Town and The Gate library closing early due to flooding, and reported flooding of a basement flat in Stratford.

Residents and experts appeared to place the blame for the flooding firmly on the area’s drainage systems. Lisa Hudson, a Canning Town resident said, “Last year the council attended immediately to the drains and the water dispersed almost immediately. Clearly there are drainage issues that have not been rectified since the previous floods.”

A spokesman for Newham Council added, “Flooding from heavy rain does not happen a lot in Newham but some areas are at a higher risk because of their geography and drainage.”

There are a number of reasons why the London drainage network is so susceptible to flooding.

One significant, but little-known risk factor is London’s ‘lost rivers’. In years gone by, the city was home to several smaller rivers and creeks flowing into the Thames. Over time, these rivers have been driven underground, buried beneath the capital’s streets and buildings.

This loss of open water courses, along with a steady loss of green spaces, means that excess water has nowhere to go. The rise in surface water run-off puts added pressure on London’s already overloaded sewer networks, increasing the risk of flooding during periods of heavy rain.

The age and condition of London’s sewer system is another big factor. The city’s drainage and sewage network was built in Victorian times and was viewed as a triumph of engineering. However, large parts of the system (which was designed to cope with a population of 2.5 million) are in dire need of upgrading and modernising and are unable to cope with the increased demand of London’s modern metropolis.

With climate change increasing the risk of extreme weather events, London will be more at risk of flooding than ever before, so it’s important that steps are taken now to improve the drainage network and protect the city and its residents from future flood damage.

There are a number of potential solutions that could be employed to help improve the performance of the city’s drainage systems. In some areas of London, Thames Water has piloted an innovative retrofit scheme of several different surface water management systems, with permavoid cells installed to store excess water. If the scheme proves successful, it’s possible that it could be rolled out to other areas of the city, helping to mitigate the risk of flooding in the future.

There are also less hi-tech solutions we can all employ in the meantime. For example, an excess of grease and fat in the sewer system can form ‘fatbergs’ and lead to blocked drains. By disposing of grease responsibly rather than pouring it down the sink, we can do our bit to help keep our drains operating effectively.

If you are experiencing problems with blocked drains, give us a call. We operate a 24 hour service with specialists trained to unblock your drains quickly and efficiently.