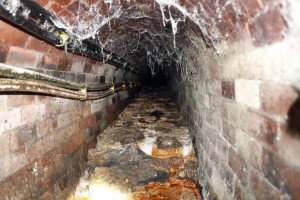 Thames Water sewage workers have once again had to work hard under London’s streets to clear a huge fatberg – a congealed mass made up of fat, oil and grease (FOG) bound together with assorted debris including discarded wet wipes.

A 50 metre monster weighing the equivalent of two London double decker buses was found underneath Lisle Street in Soho. Workers could only clear it at evenings at weekends as the busy area above is usually thronging with tourists and lorries making deliveries to the multitude of restaurants and other businesses located there.

Fatbergs are becoming the scourge of many built up areas, not just London, although the capital has had a series of major FOG build ups over the years. In 2015 a large fatberg under the streets of Chelsea caused £400,000 worth of damage to the sewers, in 2014 a giant the length of a Boeing 747 was found under the streets of Shepherd’s Bush, and in 2013 a 15 ton monster was cleared form sewers in Kingston Upon Thames.

While the larger ones make the headlines, smaller build ups are an ongoing and unfortunately ever-present issue for the army of engineers and sewage workers endeavouring to keep London’s sewers clear through drain cleaning and other methods.

Another monster the length of two football pitches was found recently under the streets of Whitechapel in East London; CCTV inspections showed it to be totally blocking the sewer making for a very real risk of raw sewage spilling onto the streets. Clearing this and other fatbergs is very labour intensive as they set hard like concrete, and all the more frustrating for water authorities as they are easily avoidable.

Fatbergs are formed when grease, oils and fats build up and congeal, a process often ‘helped’ by disposed wet wipes acting as a type of binder; they could be avoided if people were more careful when disposing of cooking oils, fats and grease.

In the case of the fatbergs in Soho and Whitechapel, much of the blame is being apportioned to restaurants and other food outlets. It’s thought many don’t properly dispose of grease and other cooking substances through the use of grease traps, or simply storing excess grease until it cools and disposing of it through such means as recycling.

Indeed, a survey of the restaurants on Whitechapel Road found that none of them had a fully functioning grease trap. A Thames Water spokesman was quick to point out that they’re not suggesting restaurants wantonly pour the grease from a pan down the sink, more that everyday and repeated smaller amounts of grease from used plates, pots and pans adds up over time.

It costs Thames Water around £1 million a month to clear assorted fatbergs, and while they send inspectors out to try and help educate restaurants as to the measures they can take to avoid improper disposal of FOGs, domestic households also contribute to the problem. Repeated careless disposal of even smaller amounts of cooking fats down the sink eventually causes a buildup in the sewers, and wet wipe disposal is usually a domestic issue.

Various water authorities nationally try to educate people in their catchment as to the implications of careless FOG and other waste disposal such as Thames Water’s ‘bin it – don’t block it’ campaign.

Severn Trent Water, covering large areas of the West Midlands, say that more than three quarters of drain blockages it clears are down to careless FOG disposal They mounted a campaign on the run up to Christmas 2016 to educate their 3.7 million customers as to the perils of careless FOG disposal when cooking for the festive season. Many households would be using their cooking facilities a lot in preparing Christmas dinners and other festive meals that likely use large amounts of cooking fats and oils to cook roast potatoes, baste turkeys and so forth.

Yorkshire Water encourages its customers to recycle FOGs and arranged collection of them from homes to go to recycling.

Fatbergs could hamper the Internet

Along with flooding and damage to the sewers, larger build ups could cause problems with broadband communications as many sewer tunnels carry the thick cabling needed for data transmission. While the cables have a thick enough covering to thwart gnawing rats, a large fatberg could cause them to come adrift from their sewer ceiling moorings.

Clearly, careless disposal of FOGs can do more damage along with blocking sewers.