Where Does All The Waste Water Go?

Have you ever stopped to consider where the water from your toilet and sinks goes to? It was not long ago that almost every home had a cesspit to collect all household waste, in fact, in many remote communities’ cesspits are still the norm. There are many myths surrounding our drainage and although the Roman’s did indeed do much for the country, they did not build the foul drainage channels that are still present in the streets below London. 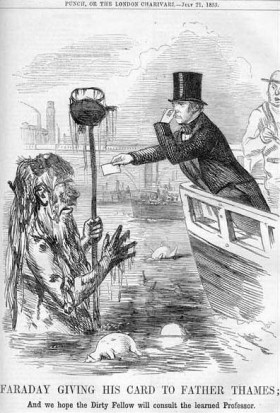 Faraday Father Thames - The Great Stink of 1858[/caption] According to SewerHistory.org, the first sewers in London were simply open ditches that drained towards the Thames. The word sewer actually derives from Old French seuwiere, which means to remove water. In modern English, sewerage describers the sewer network and sewage is the waste water within the network. Modern sewers are kept separate from rainwater drainage and remain fully enclosed between house and treatment work. However, in many cities, including London, parts of the sewerage network are still connected to rainwater runoff, and this is a common cause of sewage overspills.

The History and advances of sewage treatment works

It wasn't until the late 1850’s that London began to recognize the importance of a fully functioning sewage system. Before this time diseases such as typhoid and cholera claimed thousands of lives as a result of untreated sewerage and un-sanitised water. The Thames resembled an open sewer despite the river supplying the source for the cities drinking water! The Great Stink of 1858 was The Thames become almost clogged with foul waste and this prompted the government to take action to improve the city’s outdated sewage systems. In 1859, engineer Joseph Bazalgette began work on the first intercepting underground sewers.

Who is responsible for private drains and sewers? LDF explains all

Ever wondered who needs to foot the bill for your drain maintenance or repairs? LDF provide you with everything you need to know about drain responsibility and legislation here. “It’s a question we’re often asked here at London Drainage Facilities”, says LDF’s Managing Director Danny Fuller. “We thought we’d outline who exactly is responsible for maintaining and fixing your private drainage systems and sewers.” Most of you will already be aware of the difference between a private drain and a lateral drain.

It’s also important that we highlight the differences between a private sewer and a private drain: Up until just four years ago, the property owner was usually responsible for their private drain and private sewer. If the sewers were shared, neighbours needed to liaise and agree to divide the cost of repairs and maintenance between them. But government legislation introduced in October 2011 now specifies that water companies are responsible for private sewers but not private drains. If a pipe serves just one property, the property owner will need to arrange the maintenance or repair and pick up the bill; if a pipe serves more than one property and is therefore classed as a sewer,