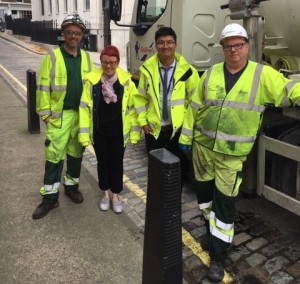 Blocked drains and gullies cause flooding and damage. One council has decided to combat the problem at source.

Plans from Westminster Council to levy a sewerage surcharge on construction companies will save Londoners thousands by ensuring that those who create blockages during the course of their work are charged for the associated cost of putting them right.

Clogged up gullies and blocked drains are a significant problem, particularly in areas like Westminster, where there are plenty of construction projects in progress. Even with the best systems in place, it is inevitable that a certain amount of rubble and building material will enter the city’s drainage system.

And the sad truth is that there are some contractors who have processes that fall far below best practice. A small minority have even been known to intentionally dump waste down drains, sometimes causing damage that can cost hundreds of thousands to put right.

Gullies are the official name for the drains by which rain water makes its way from the streets to the sewers below. Unfortunately, their convenience and accessibility mean they also tend to gather all manner or other detritus, including leaves, cigarette ends, sand, gravel and concrete.

Sweeping a little of this kind of material down the drain might sound like no big deal, but the problem is that once it is in the gulley, it steadily builds up. Cabinet minister Danny Chalkley remarked that blockages can cause flooding that in turn leads not only to inconvenience but to major property damage for residents.

When gullies become blocked, water will simply seek out the path of least resistance. Often, this results in damage to the broader infrastructure, such as roads and paths.

Westminster Council is one of the most proactive in the country when it comes to monitoring what goes down its drains. It recently set up underground CCTV surveillance. Not only has the technology provided an unprecedented perspective on subterranean London and brought to the council’s attention some drains that it never knew existed, but it has also given them better information than ever on what is down there that shouldn’t be.

Offenders, in the loosest sense of the term, come in two types. The first and worst are the fly tippers, such as those we reported earlier, who intentionally dump rubbish down the drain rather than dispose of it responsibly. The second category are the vast majority of responsible contractors, who inevitably add a certain amount of materials to the drainage network in the course of their activities.

If the scheme is approved, it will involve incorporating a charge into the structural licence fees that contractors are required to hold. This will cover the estimated cost to the drainage network of the specific activities carried out. A final decision on implementation will be made towards the end of the year.