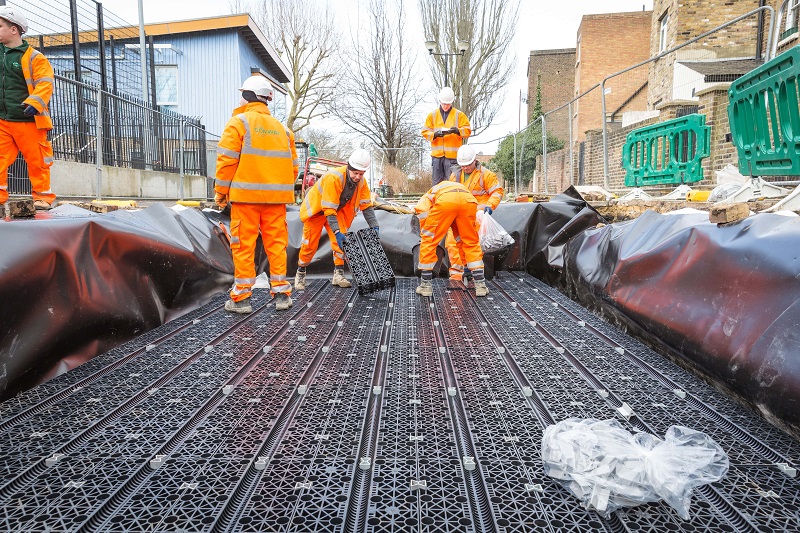 Homes near one of London’s lost rivers are at increased risk of flooding but a new sustainable drainage project from Thames Water could provide a solution.

When it comes to London, the majority of people are familiar with the River Thames. Fewer people however are aware of London’s many ‘lost’ rivers which, over time have been slowly buried under the capital, hidden beneath layers of streets and buildings.

One such ‘lost’ river is Counters Creek in the Hammersmith and Fulham area. The river originally flowed through West London to join the Thames, but in the nineteenth century, due to population growth, it was diverted underground to form part of the combined public sewer network.

The idea of lost rivers may sound somewhat romantic and mysterious, but in reality they can pose a big headache for nearby homeowners, particularly those who have properties with a basement level.

Between 1971 and 2007, the area surrounding Counters Creek lost around 20 percent of its permeable green space. This, along with the loss of all open watercourses in the locality, has led to a rise in surface water run-off which, in turn, increases the risk of flooding in the local sewer network.

In order to manage the flood risk in this area, Thames Water has worked with partners to pilot an innovative retrofit scheme which monitors and assesses the effectiveness of several different surface water management systems. Taking place across three London streets – Mendora Rd, Melina Rd and Arundel Gardens – the scheme uses Polypipe’s Permavoid geocellular system to reduce the flow of surface water into the sewer system. However, each street uses a slightly different system that is tailored to that specific environment.

At Mendora Rd, Permavoid cells have been installed beneath the paving on both sides of the street, forming 136 cubic meters of storage for excess water. Prior to entering the storage tank, the water also passes through a Permafilter geomembrane to remove any oil and other vehicle pollutants.

A different approach has been taken at the Melina Rd scheme, with four separate storage tanks installed beneath the street’s rain gardens. These tanks contain over 2,000 Permavoid Permafoam cells which collect rainwater and can be used to irrigate the vegetation above. This technique is viewed as a ‘green’ solution, reducing flood risk during heavy rainfall while also providing additional urban green space and promoting plant growth.

The next stage of the project will see a third system design implemented at Kensington’s Arundel Gardens later this month. For this scheme, Permavoid will be installed beneath the road surface, with the stored rainwater being used to irrigate established magnolia trees on either side of the street.

At all three sites there has been a commitment to maintaining residents’ quality of life and preserving biodiversity, and it’s great to see green infrastructure solutions being showcased in this way.

As a London drainage company, we are delighted to see innovative sustainable drainage systems playing a key role in mitigating urban flood risk, and we hope that the scheme will demonstrate the benefits of collaborative working and the potential of retrofit flood defences to make a real difference in our cities and to the people who live in them.