The Sunken Treasures of a Paris Canal -

The Sunken Treasures of a Paris Canal 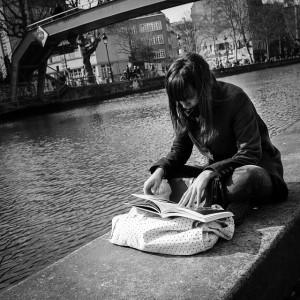 The Parisian Canal Saint-Martin attracts youngsters from all over Paris.

The Parisian Canal Saint-Martin is being dredged for the first time in 15 years. The list of objects found so far is both long and bizarre.

The Canal Saint-Martin in the French capital is a popular spot for young, trendy Parisians, known locally as “Bobos”, the English language equivalent of “Bohos” or bohemians. Now known as an attractive location for drinking aperitifs on summer evenings, the canal was originally built with the hope of increasing the city’s drinking water supply after its completion in 1825. However, this large canal requires cleaning every decade or so, and often what is uncovered in the banks of the canal is very unusual.

Every 10-15 years the canal is drained and then cleaned. It has now been 15 years since the previous clean. Every time that the canal is dredged, an array of bizarre objects tend to surface, providing Parisians and the media with a good deal of entertainment and bringing crowds of people flocking to the banks of the canal that was made famous by the popular French film, Amélie.

The canal holds 90,000 cubic metres of water, all of which must be drained by workers each time it is due for cleaning. This water is emptied into the River Seine, the best-known river in Paris. The canal is home to tens of thousands of fish, all of which must be moved away before draining. Once the water has been drained, tractors are then used to begin dragging away all of the items at the bottom of the canal in the muddy sludge. This is an expensive process, taking roughly three months to complete.

The Inventory Of Items So Far…

The objects that are surfacing from the sludge seem to reveal a secret life of Paris. Items that have been seen so far include a giant dustbin, a seemingly endless collection of wine bottles, street signs, umbrellas and suitcases. In addition, there is one item that has appeared more times than was expected; around 100 Vélib hire bikes have been found. These are the Parisian equivalent of, and the original inspiration for, London’s Boris Bikes and require a small fee each time they are used, suggesting that the bikes now lying in the mud had been stolen and then thrown in. More worryingly, weapons are occasionally found. During this clean at least one handgun has been found, and police are expecting more.

The last time the canal was drained was in 2001. During this cleaning process, an equally strange selection of items was found including shells from the first world war, washing machines and, as might be expected, tonnes of rubbish. A cleaning operation carried out before this even found 56 cars.

Lessons to be Learnt

This enormous cleaning process, while amusing for some, has highlighted a littering problem in Paris. The Paris city hall has since called for a reduction in littering and many have complained that the young and trendy Parisians are using this canal as if it were a dustbin. The process of removing all of the odd items found during a clean is likely to increase the cost and time taken to complete the operation. The city hall and many locals are hoping that in the next decade, the canal will be treated with more respect to prevent the surfacing of so many strange objects during the next clean.

We are often surprised by what we find when cleaning London’s drains, but a canal clean-up is on another scale altogether.