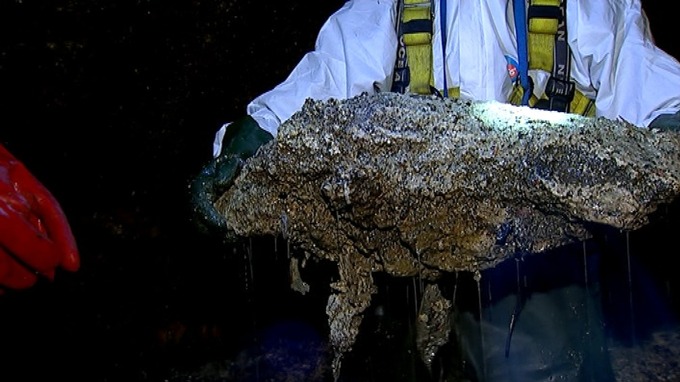 Part of a fatberg removed from a London sewer

The Man-Made Menace Beneath Our Streets

Water companies fear that excess cooking fats disposed of over the Christmas period could have unfortunate consequences for our sewer systems.

Most of us find ourselves overindulging on delicious food during the festive period, only to bemoan our tight waistbands come January. But it seems that Christmas dinner doesn’t just have an impact on our waistline – it is also contributing to the creation of enormous ‘fatbergs’ in London’s sewers, increasing the risk of blocked drains and flooding.

When cooking fat and other substances that are difficult to break down, such as wet wipes and sanitary products, enter the sewer system, they form large congealed lumps which water companies refer to as fatbergs. These fatbergs display similar properties to concrete – heavy, solid and dense – making them very difficult to clear and causing big headaches for water and drainage companies alike. And this is not just a small problem. Fatbergs can reach enormous sizes and, in some cases can even break the pipe it sits in. In 2015, a 40m fatberg, was cleared from the sewers beneath Chelsea in West London – resulting in over 2 months of repair work and an estimated cost of £400k. This ITV report takes a closer look at fatbergs, which reportedly cost around £12 million a year to manage.

Fatbergs have been a growing problem in recent years, thanks largely to the rise in the use of wet wipes, but they also seem to be more prevalent at certain times of the year. For example, water companies have warned that sewers are particularly at risk of fatbergs around Christmas time. And it seems that our treasured Christmas dinner is the main culprit.

Christmas dinner produces a lot of excess fat – from the leftover grease from pigs in blankets, buttered vegetables and roasties, to the three quarters of a pint of fat left behind by the average turkey. In many households, this fat is poured straight down the sink, which can have catastrophic consequences for our sewers, causing blockages, and unpleasant overflows and flooding.

How to Avoid Fatbergs

So, if fatbergs are such a problem, what can we do to avoid them? The key lies in the way we dispose of our excess cooking oils and fat.

It is estimated that each year we pour tens of thousands of litres of waste fat, cooking oil and grease down our sinks – and this rises exponentially during the festive period. While the fat is in liquid form when it goes down the sink, it solidifies into a congealed mass once it hits the cold sewer – leading to the creation of the infamous fatbergs.

In order to avoid this situation, water companies have launched the ‘Think Sink’ campaign which encourages homeowners not to dispose of excess cooking fat down the drain. Instead, the campaign advises that we leave cooking fats to cool and solidify before disposing of them in the bin. To cut down the amount of fat in the sewer even further, the campaign also recommends scraping food scraps and fat off your dishes before washing, and wiping plates and pans with kitchen roll to remove any grease, before putting in the dishwasher.

By following these simple steps, and also by thinking about how we dispose of other items, such as wet wipes, we can decrease the risk of fatbergs and help our hard-working sewers live to fight another day.